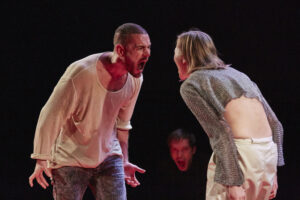 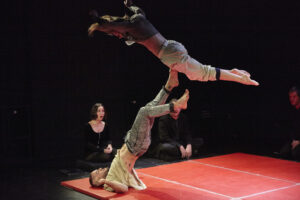 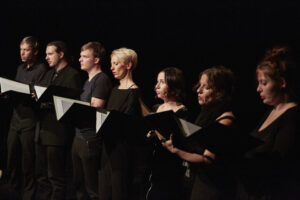 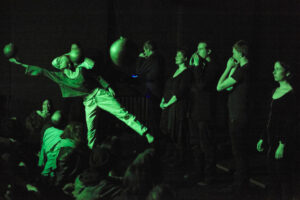 Tiferet is composed by Amir Shpilman and merges theatrical means, movement, and new music compositions into one seething evening. The outcome is an evolving journey into new sonorous spaces.

The performance begins with an explosive exchange through a passionate ritual between two dancers in a confined space at centerstage. Step by step, the scene grows as the vocal soloists merge their actions with the dancers and move the music away from centerstage and closer to the audience. Surrounding the audience, a hidden choir is gradually revealed and it generates a circle of surrounding sound that grows in volume and ascension of tones. At that point the Dynamic Speakers © lower from the ceiling and moving freely right above the audience, creating independent, oscillating fields of sound.

“TIFERET IS A BEAUTIFUL AND CRAZY JOURNEY INTO THE WORLD OF KABBALAH. A FANTASTIC WINDOW INTO THE QUESTION OF WHAT IT MEANS TO BE A HUMAN BEING.” Carsten Dippel, Deutschlandfunk Kultur Radio.